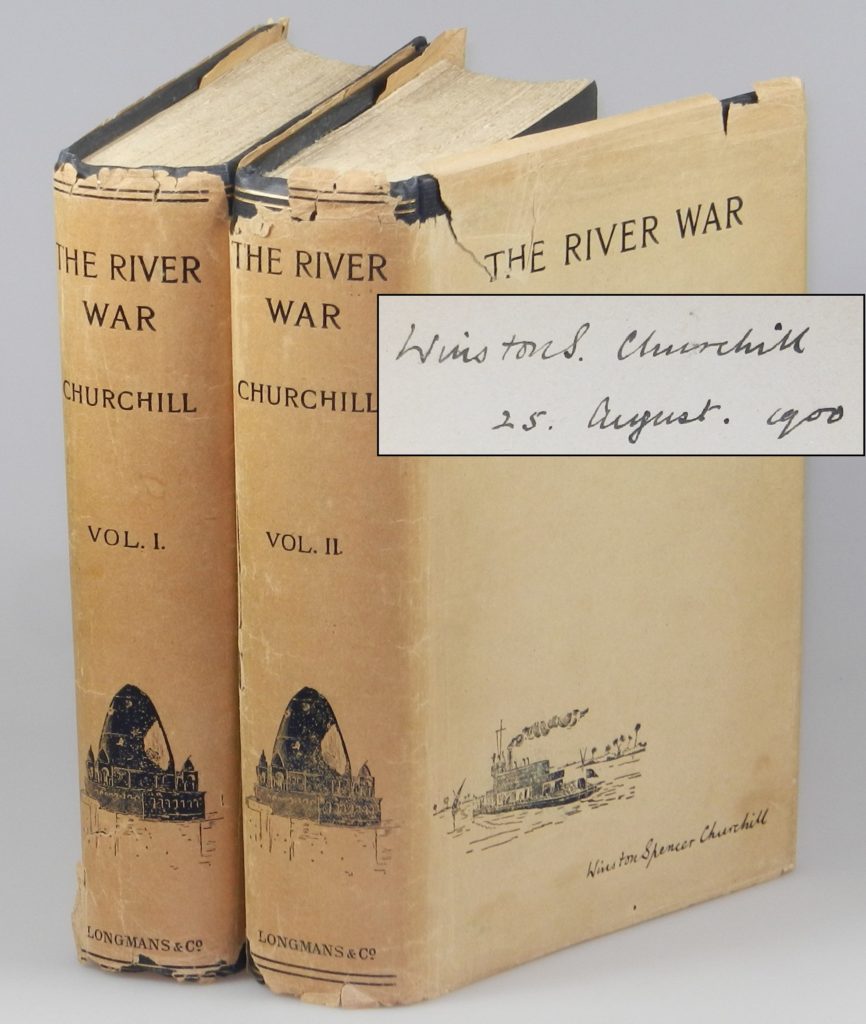 Today we write about a truly extraordinary item that will be featured in our forthcoming fall catalogue.

This first edition, final printing set of Churchill’s second book, The River War, is not only the sole set known to retain the original dust jackets, but is also signed and dated by Churchill on 25 August 1900, during the period when he was campaigning for his first seat in Parliament.

This set comes to us from the collection of Churchill’s bibliographer, Ronald I. Cohen. It is difficult to overstate the singularity and appeal of this set which, jacketed and signed, is among the rarest of prizes in the Churchill canon. All the hyperbole we might conceive pertains. 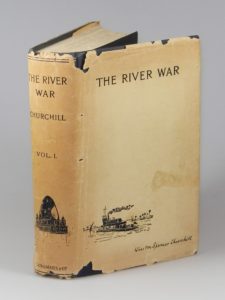 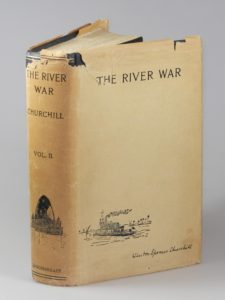 A photocopy of this very Volume I dust jacket is featured on p.29 of Richard Langworth’s A Connoisseur’s Guide to the Books of Sir Winston Churchill. The dust jackets are printed on thin, manila stock and printed in black, exactly duplicating the print and illustrations of the bindings, including the Mahdi’s tomb on the lower spines and gunboat on the lower front
covers. The jacket flaps and rear faces are blank. 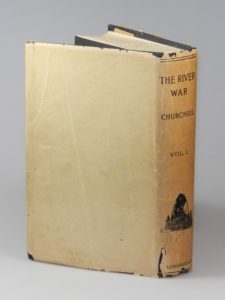 These dust jackets, of course, belong to a first edition, third printing set. Given that the bindings of all three printings are identical, and that only seven months separate the first and third printings, it is probable to the point of near certainty that the dust jackets for all three printings were identical. There is neither reason nor – given that these are the sole surviving examples – data to indicate a contrary conclusion. 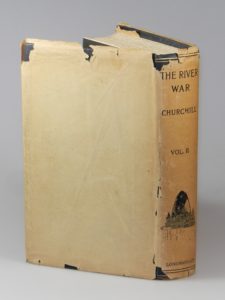 That these dust jackets are the sole known surviving examples also seems reasonable. At the time of publication, it was customary for booksellers to discard the dust jackets prior to shelving the books for sale. This custom would only have been encouraged by the exceptionally handsome, illustrated bindings of this particular edition. Moreover, the dust jackets are printed on thin stock which, wrapped around these particularly thick and heavy volumes, must have proven quite prone to damage and subsequent discard.

The understandable impulse to re-allocate these sole surviving first edition dust jackets to a truly fine first printing set is a temptation that Mr. Cohen laudably resisted, given the magnificent state of these bindings and the fact that this set is also signed and dated by Churchill in the year of publication. 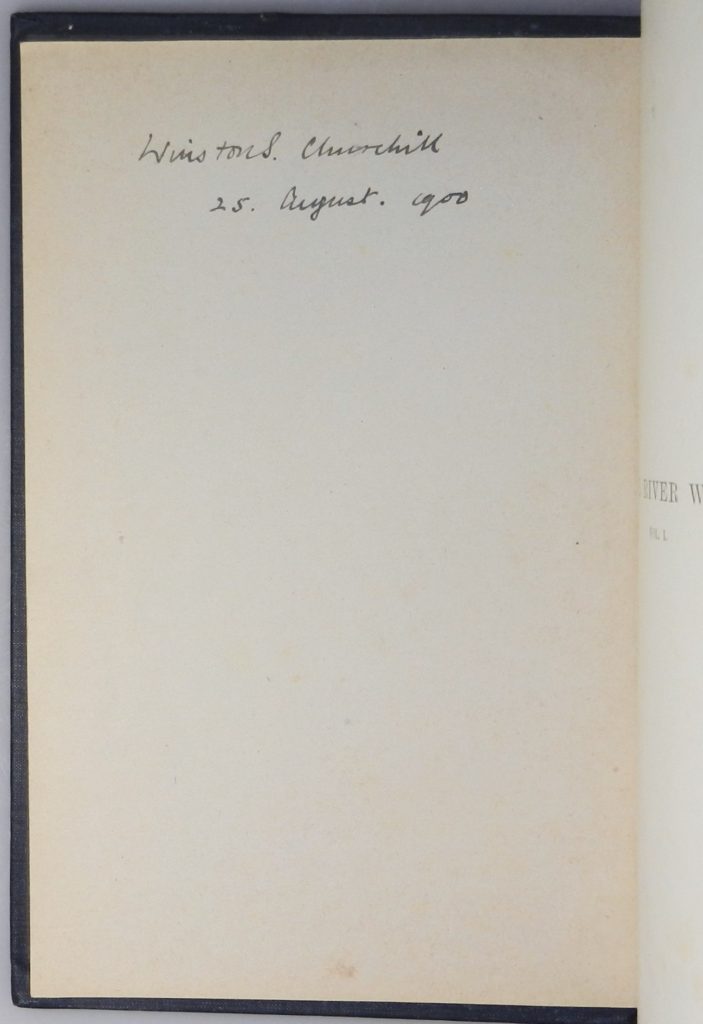 Churchill’s dated signature in The River War would not customarily be an afterthought, but the presence of the original dust jackets makes this set the exception.

Such early signatures in Churchill’s early works are scarce, and doubly so when dated. Though he would become one of the great leaders of the 20th Century, it was a still markedly Victorian Churchill who signed and dated this quintessential 19th century work at a time of momentous transition in his life. When Churchill inked his name in this set, he was on the cusp of the political career that would dominate the next six decades of his life and fundamentally shape the world he occupied.

Nearly all of the accomplishments that made Churchill an indelible part of history lay ahead of him when he signed this set of books. 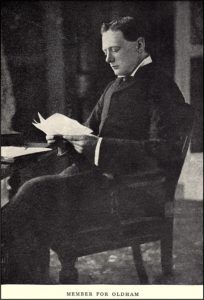 On 25 August 1900, the day this set of The River War was signed, Churchill was just 25 years old, campaigning hard in Oldham, where he would win his first seat in Parliament on 1 October 1900.

On 12 August 1900, Churchill wrote to his mother, Lady Randolph Churchill: “I must concentrate all of my efforts upon Oldham. I am going to have a thorough campaign from the 20th to the 23rd of this month, speaking at 2 or 3 meetings every night upon the African question, and trotting through Cotton Mills and Iron works by day…” Electioneering apparently lasted longer than Churchill planned; on 27 August the Prince of Wales wrote to Churchill: “…You are I suppose busy electioneering…”

On Saturday, 1 September 1900, Churchill wrote again to his mother: “I enclose a report of my Beverly speech wh[ich] was about the best platform effect I have ever produced. I flattened out all the interrupters in the end to the delight of the audience…. I go to Paris Sunday afternoon with Sunny.” The “Sunny” to whom Churchill referred was his cousin, the Duke of Marlborough, with whom, along with Ivor Guest, Churchill went to Paris for a few days to the International Exhibition.

Thirty-seven days after he inscribed this set on the hustings in Oldham, Churchill won his first seat in Parliament partly on the strength of his status as a veteran and British hero of the Boer War. Before he took his seat, Churchill made his first lecture tour of the U.S. and Canada, which was intended to improve his finances during a time when Members of Parliament received no salary for their service.

While Churchill was still in Canada, Queen Victoria died. In a 22 January 1901 letter, Churchill wrote to his mother, Lady Randolph:

… So the Queen is dead. The news reached us at Winnipeg and this city far away among the snows…

The end of Queen Victoria’s 64-year reign would also see Churchill close his 19th-Century career as a cavalry officer and war correspondent adventurer. The Queen’s funeral took place on 2 February 1901 – the same day Churchill sailed from New York on the SS Etruria for England to take the seat he had won in Parliament. Churchill’s more than six decades-long Parliamentary career – still nascent when he signed this set – would span the Boer War to the Cold War with two world wars in between, and see the world of imperial cavalry charges so vividly recounted in these books almost inconceivably yield to the world of global superpowers and nuclear weapons. 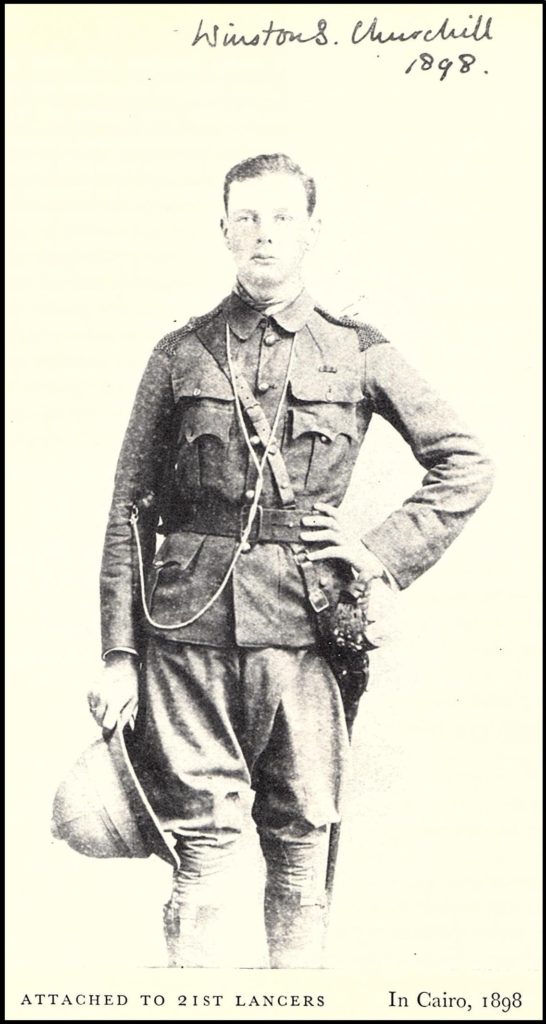 This is a fitting work for Churchill to have signed on the cusp of his Parliamentary career. This third printing of The River War is not only by far the scarcest issue of the first edition, but also the last unabridged issue to this day. All three first edition printings are bibliographically identical, issued respectively in November 1899, February 1900, and June 1900. Only 140 copies of this third and final printing were ever made available. (The balance were destroyed by the publisher.)

Mohammed Ahmed was a messianic Islamic leader in central and northern Sudan in the final decades of the 19th century. In 1883 the Mahdists overwhelmed the Egyptian army of British commander William Hicks, and Great Britain ordered the withdrawal of all Egyptian troops and officials from the Sudan. In 1885, General Gordon famously lost his life in a doomed defense of the capitol, Khartoum, where he had been sent to lead the evacuation of Egyptian forces. Though the Mahdi died in 1895, his theocracy continued until 1898, when General Kitchener reoccupied the Sudan.

With Kitchener was a very young Winston Churchill, who participated in the decisive defeat of the Mahdist forces at the battle of Omdurman in September 1898.

In this book about the British campaign in the Sudan, Churchill – a young officer in a colonial British army – is unusually sympathetic to the Mahdist forces and critical of Imperial cynicism and cruelty. This work offers us the candid perspective of the future great man of the 20th century from the distinctly 19th century battlefields where Churchill learned to write and earned his early fame. Here is a chief architect of the Second World War involved in what has been called the last “genuine” cavalry charge of the British army. 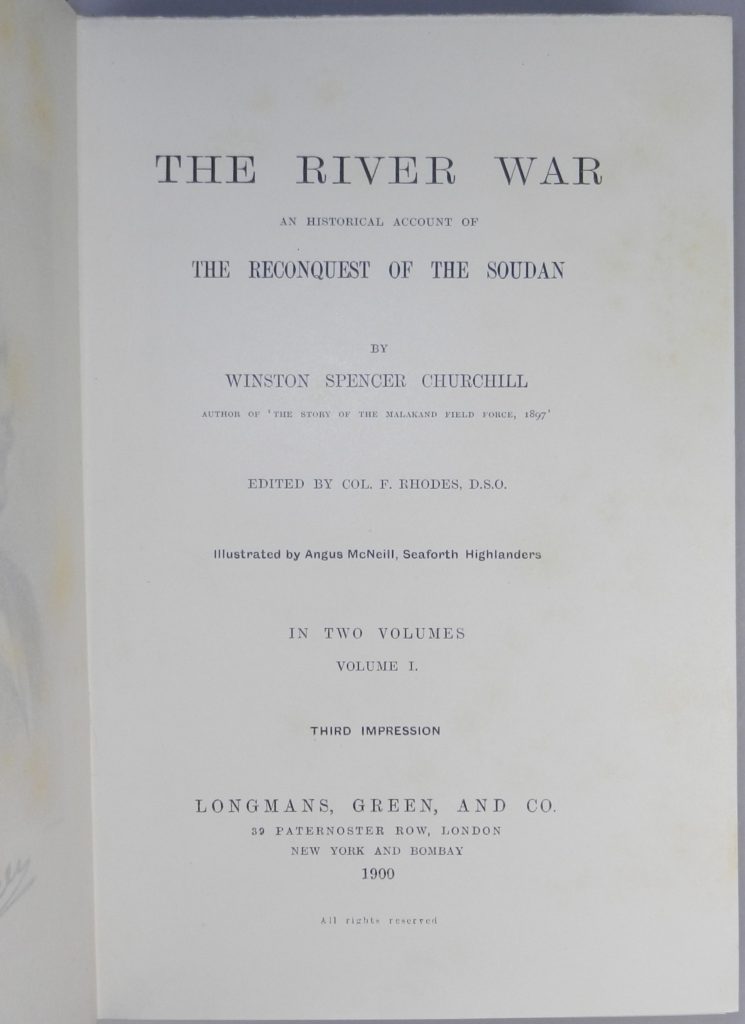 This work – and in particular this edition – is as important and desirable as any in the Churchill canon. The two massive volumes of the first edition are compelling in every respect. Aesthetically they are lavish and striking; the two large, weighty volumes are beautifully decorated with gilt representations of the Mahdi’s tomb on the spines and a gunboat on the front covers. Internally, they are equally appealing, being profusely illustrated with images, maps, and plans. From a collector’s standpoint the edition is scarce; all three printings of the first edition total only 2,646 sets.

Last but not least, the text is not only arresting, insightful, powerfully descriptive, and of enduring relevance, but also unique to the first edition, which is the only unabridged edition ever published. In 1902 Churchill (by then more mindful of political exigencies) revised and abridged his text, excising much criticism of Kitchener. All editions published since this third and final printing of the first edition are based on the 1902 abridged text.

The overarching context for any description detail is that this set is both jacketed and inscribed, and thus truly singular.

Attending to the mundanities of a detailed condition report, we would grade this set as near fine plus in good dust jackets. Both dust jackets are substantially complete, with all illustrations and printed text intact, but nonetheless with perimeter losses, overall wrinkling and wear, and minor soiling.

The Volume II dust jacket shows losses at the spine ends to a maximum depth of one inch, lesser chipping to the balance of the edges, closed tears that extend into “THE” in the upper front face title lettering, some splitting and fractional loss along the rear hinge, short tears and minor loss at the flap folds, very light spine toning, and light soiling. 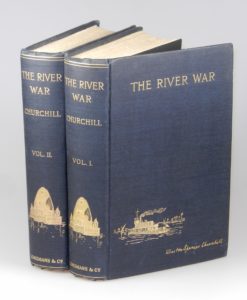 Both dust jackets are, of course, protected beneath removable, archival quality clear covers.

The blue cloth bindings of both volumes are, as one would expect, exceptionally bright and clean, with entirely unfaded color and vividly bright gilt on both the spines and front covers. Volume I, which bears the author’s dated signature, shows a little wrinkling to the spine ends, trivial shelf wear to the lower edges, and bumps to the lower corners. The binding remains fully attached, but a little tender at the front hinge. The Volume II binding likewise shows a little wrinkling to the spine ends, just a hint of mottling of the blue color at the bottom edges, and minor corner bumps.

The contents of both volumes remain unusually bright, with modest spotting substantially confined to the prelims and otherwise bright page edges. The original black endpapers are intact, as are all illustrations, maps and plans. All of the folding maps are pristine and properly folded, with no tears or losses. All photogravure portraits, including the frontispieces, are intact, as are their original tissue guards. We find no previous ownership marks other than the author’s Volume I signature.

This set has resided in the personal collection of Churchill’s bibliographer, Ronald I. Cohen, for nearly three decades. The set was sold by Sotheby’s in the same auction which saw sale of a jacketed first British edition, later printing of Savrola (Churchill’s third published book) signed by Churchill on the same date. This copy of Savrola is now held by the University of Illinois in its Mortlake Collection.

We can reasonably speculate that perhaps both this set of The River War and the companion signed and jacketed Savrola were presented by Churchill to the same Oldham supporter, from whose library they eventually made their way to the 1966 Sotheby’s auction and then eventually to Mr. Cohen (in the case of The River War) and famed British bookseller Harold Mortlake and ultimately the University of Illinois (in the case of Savrola).

Our forthcoming catalogue, which should be available in late September, will feature this set among a large number of brand new listings, all noteworthy first edition works by Churchill in original bindings. Please let us know if you will wish to receive a printed copy of the catalogue.