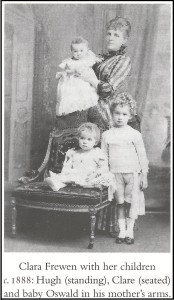 Churchill Book Collector is pleased to announce that we will begin offering items from the incredible Frewen family collection.

The Frewen collection features inscribed copies of Churchill’s books spanning more than half a century, from 1906 to 1958, and three generations of Churchill’s relatives on his mother’s side, including his Aunt Clara and her descendents.  The collection is noteworthy not only for inscribed first editions, but also for accompanying correspondence and annotations.

The collection has remained in the Frewen family until now, providing both sterling provenance and a unique opportunity for collectors.

Individual family members to whom volumes are inscribed include the following:

Here are some highlights from the Frewen collection:

We will be offering items from this singular collection over the next several months; watch for our forthcoming emails. If you are not on our confidential contact list, now would be a good time to join. Click HERE.

Please note that a number of items from the Frewen collection will also be featured by us at the Pasadena Book Fair held on January 31 and February 1 at The Pasadena Center in Pasadena, California.  If you are able to attend, please ask us for complimentary tickets.

We look forward to making this wonderful collection available to Churchill enthusiasts, collectors, and scholars for the first time.