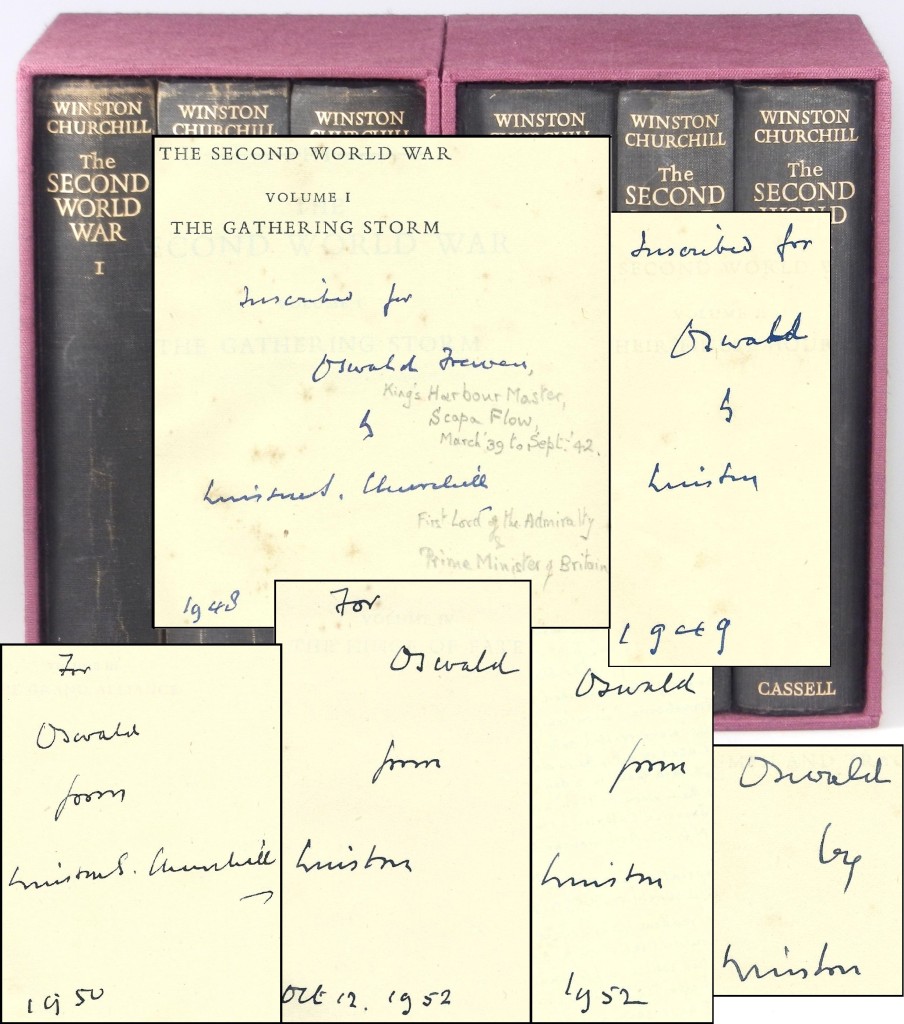 Churchill Book Collector is pleased to present a unique full set of British first editions of The Second World War.

What makes this set unique is that each volume is inscribed to the same recipient – Churchill’s first cousin, Captain Oswald Moreton Frewen. Four of the volumes are inscribed in the year of publication. Moreover, the set includes three letters about the books addressed to Oswald from two of Churchill’s private secretaries on both Chartwell and 10 Downing Street stationery. Oswald not only requested the inscriptions, but cheekily made corrections to this signed set of his books and sent emendations to his cousin.

This is our latest offering from the incredible Frewen family collection. To read more about the collection, please see our January 12th blog post. This post provides full images and details about this set.

The Volumes and Inscriptions

Volume I, The Gathering Storm

The British first edition, first printing. The five line inscription in blue ink on the half title recto reads: 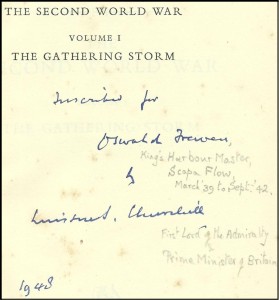 Beside his own name, in pencil in Oswald’s wrote: “King’s Harbour Master | Scapa Flow | March ’39 to Sept ’42” and beside Churchill’s signature “First Lord of the Admiralty | & | Prime Minister of Britain”. Oswald also made pencil annotations to pages 92 & 582, referencing these annotations on the half-title verso. 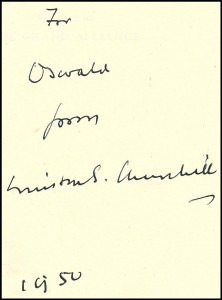 Laid in at the Volume III half-title, on Chartewell letterhead, is a letter to Oswald from Churchill’s Private Secretary Cecily Gemmell dated “4 August 1950” (two months after publication): 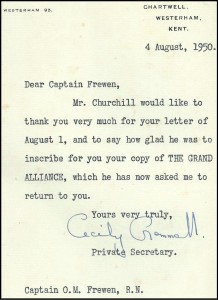 “Dear Captain Frewen, Mr. Churchill would like to thank you very much for your letter of August 1, and to say how glad he was to inscribe your copy of THE GRAND ALLIANCE, which he has now asked me to return to you.”

Volume IV, The Hinge of Fate 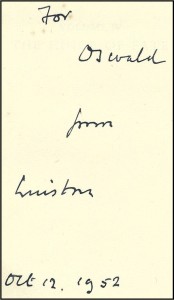 Tipped onto to the first free endpaper is an October 16, 1952 letter on 10 Downing Street stationery from Jock Colville to Oswald: 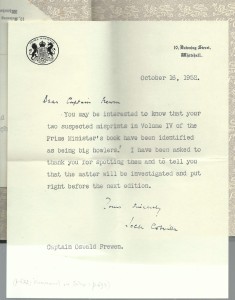 “You may be interested to know that your two suspected misprints in Volume IV of the Prime Minister’s book have been identified as being big howlers! I have been asked to thank you for spotting them and to tell you that the matter will be investigated and put to right before the next edition.”

Affixed to the front pastedown is the original franked envelope in which the letter was posted to Oswald. 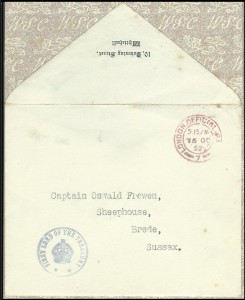 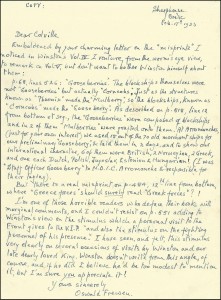 “Dear Colville, Emboldened by your charming letter on the “misprints” I noticed in Winston’s Vol. IV I venture, from the worm’s eye view, to remark on Vol. V, but don’t want to bother Winston himself about them:”

Oswald then enumerates a number of emendations, concluding with a complimentary paragraph about the “stimulus on the fighting personnel of his presence” imparted when Winston made “a personal visit to the Front”.

Colville’s reply to Oswald, dated February 18, 1953 and typed on 10 Downing Street stationery, is tipped onto the half title: 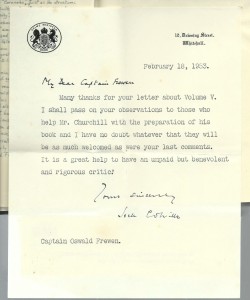 “Many thanks for your letter about Volume V. I shall pass on your observations to those who help Mr. Churchill with the preparation of his book and I have no doubt whatever that they will be as much welcomed as were your last comments. It is a great help to have an unpaid but benevolent and rigorous critic!” 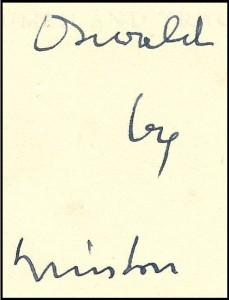 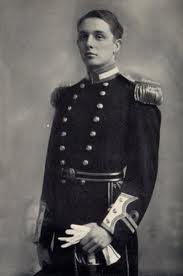 Oswald Moreton Frewen (1887-1958) was first cousin to Winston Churchill.  His mother Clara (1851-1935) was the eldest sister of Churchill’s mother, Jennie (1854-1921).  Oswald was the youngest of three children born to Clara Jerome Frewen and Moreton Frewen.

While Churchill was serving as First Lord of the Admiralty during the First World War, Oswald served in the Navy and was present at every naval engagement in the North Sea. In 1939, the same year that Winston returned to the Government as First Lord of the Admiralty, Oswald returned to the Navy, becoming King’s Harbour master of Scapa Flow. Oswald held this post from March 1939 to September 1942, also playing a role in the Algiers and Normandy landings and finally retiring from the Navy in 1945 with the rank of Captain.

In his retirement years, Oswald read and annotated cousin Winston’s history of the First World War (as detailed in our January 23rd blog post) and kept in touch with his cousin, closely following the publication of Winston’s history of The Second World War.  In 1949, Oswald and his sister Clare were Christmas guests at Chartwell.  (Gilbert, Volume VIII, p.498)   On 22 August 1950, Churchill wrote to Oswald about trying to complete the fourth volume: “I have had to give up all my holiday,” he complained, and stated “Volume IV is a worse tyrant than Attlee.”  (Gilbert, Volume VIII, p.548)  As this set attests, Oswald chose to congratulate Winston on his completed volume by sending him corrections!

Oswald had a childless marriage late in life. These books remained within the Frewen family until now, passing eventually to his great-nephew, from whom they came to us.

Oswald wrote these words on in the copy of Closing the Ring that is part of this set. Oswald’s comment aptly indicates the condition of this, his remarkable set of The Second World War. This set is exceptional for content rather than condition. 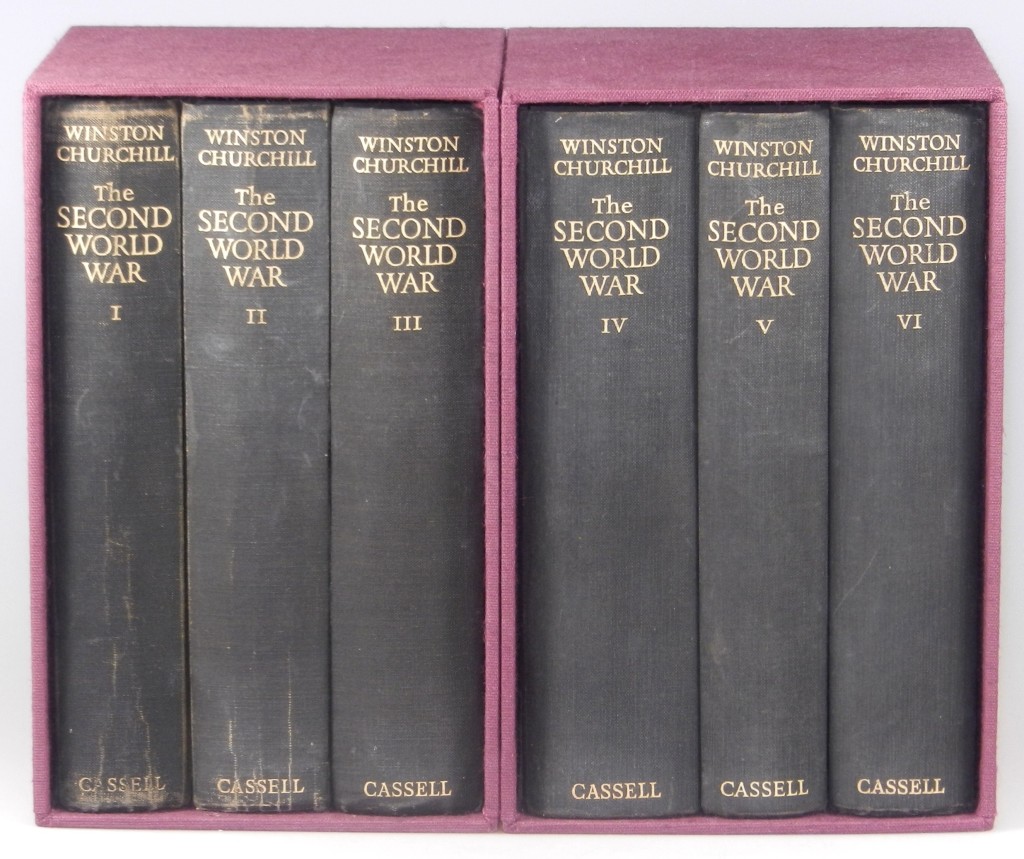 All six original bindings are sound and tight, but scuffed and a bit worn, consistent with the fact that they were diligently read by Churchill’s cousin.  The contents bear modest spotting, mostly confined to page edges.  Top edges are sunned to various shades of pink.  The only remnant of the original dust jackets is the front flap text of the Volume III jacket, affixed to the Volume III front pastedown.  We find no previous ownership marks in the set other than the aforementioned author inscriptions, comments by Oswald, and correspondence from Churchill’s private secretaries.