Winston S. Churchill may well be one of the most well-known, studied, quoted, and collected figures of twentieth century leadership and literature.

This means that even though we are privileged to handle some of the most interesting and rare Churchill material in the world, we seldom encounter items that are truly unique, previously unknown, or potentially significant to the historical record.

The item we are writing about today is all three – an apparently singular item and a rather remarkable discovery. 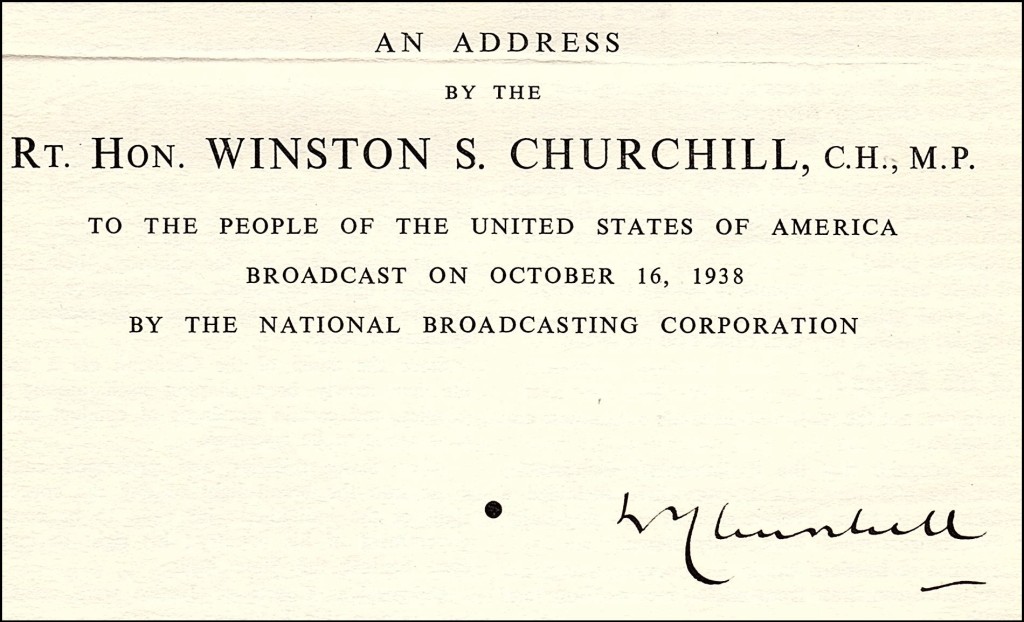 This is a previously unknown publication of Churchill’s 16 October 1938 address to the American people about the Munich Agreement. Prior to this discovery, no contemporary stand-alone publication of this speech was known. There is no doubt that this publication was contemporary, as it is accompanied by a slip on Churchill’s Chartwell stationery printed: “19th November 1938 | With Mr. Churchill’s compliments.” As we discuss in this post, it may have even been printed prior to delivery of the speech. This copy bears substantial textual and format differences from the speech as hand-emended and delivered by Churchill, and as subsequently published. Finally, it is not just the only known copy to survive of a textually unique edition, it is also signed by Churchill in bold black ink on the front cover. 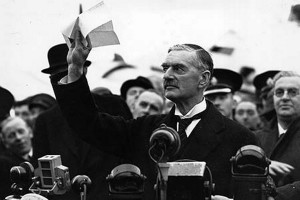 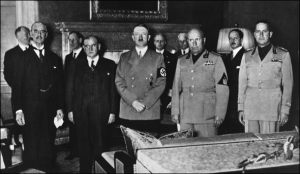 On 30 September 1938, British Prime Minister Neville Chamberlain returned from meeting with Hitler in Munich to announce that he had ceded Czechoslovakia’s Sudetenland to the Nazis in return for “peace in our time.”

After receiving the news, Churchill paused with a friend outside of a restaurant from which echoed the sounds of laughter. Churchill “stopped in the doorway, watching impassively.” Turning away, “he muttered ‘those poor people! They little know what they will have to face.’” (Gilbert, Vol. V, p.990)

Churchill was both weary and desperately worried. “He was sixty-three years old, and the strain of his five-year campaign… had begun to take its toll.” (Gilbert, Vol. V, p.961) As he had told the House of Commons in March when speaking about Czechoslovakia, “For five years I have talked to the House on these matters – not with very great success. I have watched this famous island descending incontinently, fecklessly, the stairway which leads to a dark gulf.” 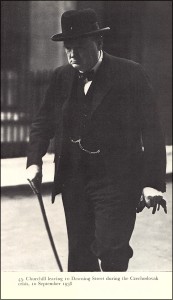 Privately, Churchill’s feelings were even more deeply disturbed. He wrote to Lord Moyne on 11 September: “Owing to the neglect of our defences and the mishandling of the German problem during the last five years, we seem to be very near the bleak choice between War and Shame. My feeling is that we shall chose Shame, and then have War thrown in a little later on even more adverse terms…” Of the time, Churchill’s biographer, Martin Gilbert, wrote: “For the first time in his political career – and it was nearly forty years since he had first stood for Parliament – Churchill’s optimism deserted him. Despite his appeal in Parliament for a national revival, the events of September 1938 filled him with a deep despondency…” (Gilbert, Vol. V, p.1007)

On 16 October 1938, NBC broadcast an address by Churchill directly to the American people. It may seem odd that Churchill – merely a Member of Parliament and representative of neither his Party nor his Government – would address the people of the United States. The fact is that Churchill’s tireless campaigning for prudent rearmament and collective security had given him a voice and audience independent of his Government. By this time, it was almost as if Churchill was Leader of the Opposition, despite sharing the party of the sitting Prime Minister. Churchill now used his personal platform to redouble his efforts to rouse Britain and America.

Churchill’s speech was a boldly unequivocal statement of the situation. “As a result of the Munich debate, relations between Churchill and Chamberlain had worsened considerably.” (Gilbert, Vol. V, p.1008) Whereas Churchill might have shown a modicum of restraint even a few weeks earlier, Munich was a breaking point – for him, for Chamberlain, and for the ever worsening strategic situation in Europe. Sixteen days after Munich, Nazi Germany had not only occupied the Sudetenland, but exceeded the agreed boundaries and begun carrying out its customary Gestapo pogroms.

All of which is to say Churchill did not hold back. To convey the dire nature of the situation and set the tone, he began “I avail myself with relief of the opportunity of speaking to the people of the United States. I do not know how long such liberties will be allowed… Let me, then, speak with truth and earnestness while time remains.”

Churchill frontally assaulted both the moral and strategic infirmity of the Munich agreement. “All the world wishes for peace and security. Have we gained it by the sacrifice of the Czechosolvak Republic… the model democratic State of Central Europe… has been deserted, destroyed, and devoured… Is this the end, or is there more to come?… Can peace, goodwill and confidence be built upon submission to wrong-doing backed by force?”

Sensitive to both America’s isolationist sentiment and its proud sense of democratized progress, Churchill couched the present in terms of both the wartime threats and failures of the past and the nature of the impending future. “The culminating question to which I have been leading is whether… the world of increasing hope and enjoyment for the common man, the world of honoured tradition and expanding science – should meet this menace by submission or by resistance.”

Though he spoke of history and moral imperative, he did not eschew blunt practicality. “We are left in no doubt where American conviction and sympathies lie: but will you wait until British freedom and independence have succumbed, and then take up the cause when it is three-quarters ruined, yourselves alone?… We shall do it in the end. But how much harder our toil for every day’s delay!”

Churchill was well aware that his calls to action were pejoratively characterized as war-mongering. Hence the title of the speech – “The Defence of Freedom and Peace.” Hence also his rhetorical inoculation against the charge: “Is this a call to war? …I declare it to be the sole guarantee of peace. We need the swift gathering of forces to confront not only military but moral aggression; the resolute and sober acceptance of their duty by the English-speaking peoples…”

A year later, in September 1939, Churchill returned to the Admiralty. He replaced Chamberlain as Prime Minister in May 1940. America would not formally enter the war until December 1941, but until she did Churchill’s relationship with America and her President, and the vital material support it brought, enabled Britain to survive. 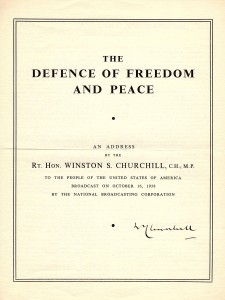 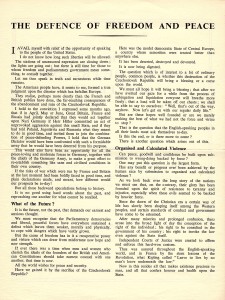 This pamphlet is in four-page folded leaflet format, the front cover as title page with text on pages 2-4, drop-head title at page 2, printer information on the lower right corner of the fourth and final page, and subject sub-headings in bold punctuating the text. 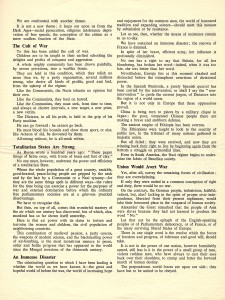 It is quite striking and unusual for a speech pamphlet publication in several respects. First, it is large, measuring 11.25 x 8.75 inches. Rather than being printed on thin, wove paper, it is printed on substantial and good quality, watermarked, laid paper. The layout features paragraph breaks for nearly every individual sentence, more analogous to the famous ‘psalm form’ in which Churchill printed his speech notes, rather than to the more conventional, condensed paragraph format of published versions. Although the printer is specified (“St. Clements Press Ltd, Portugal St., Kingsway, London, W.C.2.), no publisher is specified. 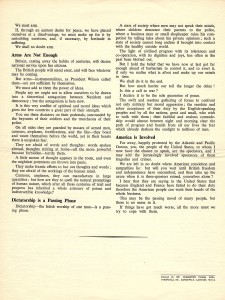 Churchill’s signature is boldly inked in black on the lower right front cover in a style we have previously catalogued spanning the 1920s to the 1940s and observed as not uncommon to his 1930s signatures, namely “WChurchill” with the final letters of his surname underscored. 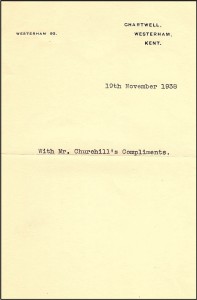 The signed pamphlet and accompanying compliments slip were acquired from the descendant of the original recipient, who held a significant and diverse collection of autograph material.

Churchill often made revisions to his speeches until the final moments preceding delivery, including this specific speech. Courtesy of The Churchill Archives Centre, we have reviewed Churchill’s hand-corrected delivery notes for this speech. Comparison of this pamphlet’s text to Churchill’s original speech notes reveal a number of hand-made emendations to the speech as delivered which are not incorporated into this printed pamphlet.  These differences (excepting minor and obvious spelling or transcription errors and small punctuation differences) are detailed in the table below.

Among numerous small, substantive differences between the pamphlet and the speech as delivered and later published is inclusion of two notably blunt lines which the original speech notes show were added by hand by Churchill to the final draft: “Britain must arm.  America must arm.”

Most significant among the changes to the version Churchill delivered on 16 October is the conclusion.  A substantial five-sentence passage – essentially the “hard-sell” to the American people, beginning with the line “Far away, happily protected by the Atlantic and Pacific Oceans, you, the people of the United States…” – appears as the final paragraph in the pamphlet but was relocated closer to the mid-point of the speech when delivered.

Speculation about the origin and publication of the pamphlet

While evidence supports a conclusion that the pamphlet was printed prior to delivery of the speech, the dated compliments slip definitively bounds the publication date.

The pamphlet features numerous and noteworthy textual differences from the speech as delivered on 16 October and versions printed subsequently, notably in its first volume publication in a work by Churchill (Into Battle in February 1941).

At this time, evidence available supports speculation that this edition was printed for Churchill prior to delivery of the speech using a late-stage draft of Churchill’s speech notes.

Typos within the speech pamphlet, as well as the numerous and substantive differences from the final text, may explain why no other copies are known. Copies may have been distributed only by Churchill. Changes made to final version of the speech not reflected in the pamphlet would ostensibly have prevented either a large print run or any subsequent editions. The notionally limited distribution, coupled with the large size and comparatively perishable nature of the publication, would help to explain why we find no record of any other copies known to Churchill’s bibliographers or collectors.

While evidence supports a conclusion that the pamphlet was printed prior to delivery of the speech, there is no doubt that it was printed not long thereafter; the presence of the dated “19th November 1938” compliments slip on Chartwell stationery definitively bounds the publication date between mid-October and mid-November 1938.

Condition of the pamphlet is superb. We note no loss, tears, appreciable wear or soiling. A hint of toning and a horizontal crease – ostensibly from when the speech was originally posted – are the only signs of age and handling. The compliments slip on Chartwell stationery is in identical condition, showing only a neat horizontal crease and mild age-toning.

We will supply scans of the pamphlet upon request.

We are pleased to offer this singular and significant item to the collecting community HERE.

One thought on “A Significant Discovery”