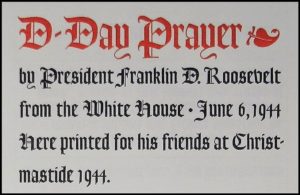 We have the privilege of being able to tell you about a remarkable memento of a remarkable moment in history. This is the limited edition of President Franklin Delano Roosevelt’s D-Day prayer, commissioned from the U.S. Government Printing Office by Roosevelt at his own expense and inscribed by him to his secretary, Dorothy Jones Brady. 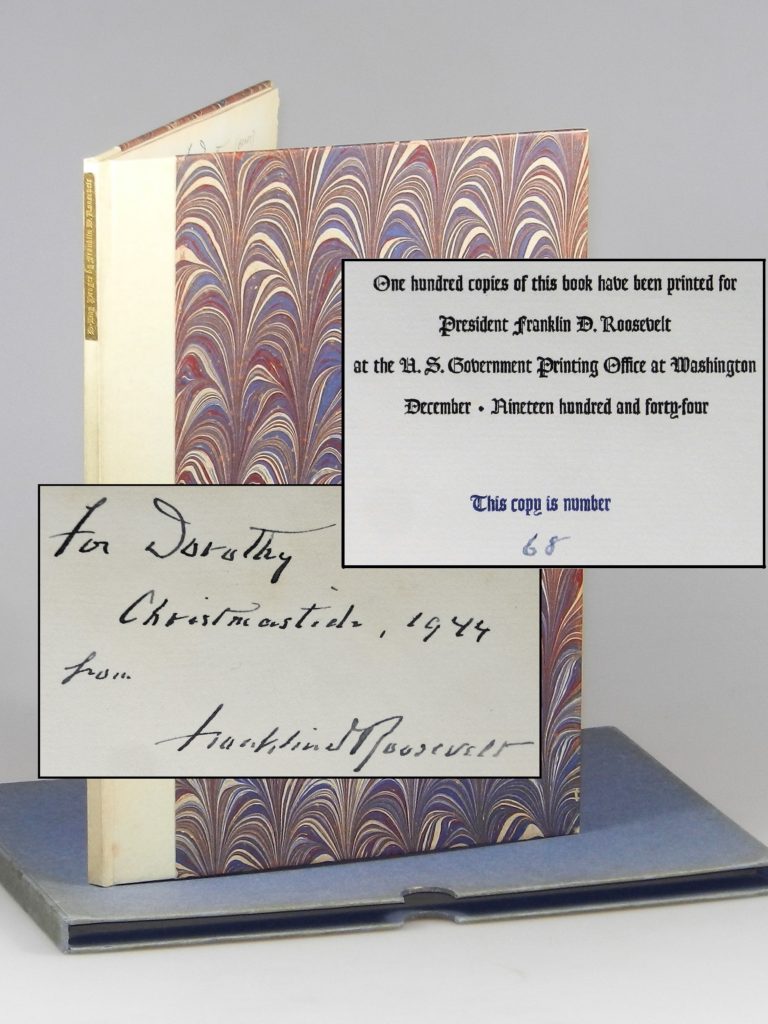 The inscription, inked in four lines on the front free endpaper, reads: “For Dorothy | Christmastide, 1944 | from | Franklin D. Roosevelt”.

Per the limitation page, one hundred copies were printed “for President Franklin D. Roosevelt at the U.S. Government Printing Office at Washington” in December 1944. This copy is hand numbered “68” of 100.

On 6 June 1944, the United States and its WWII allies launched the largest amphibious invasion in history. More than 150,000 soldiers, sailors, and airmen had crossed the English Channel to storm the beaches at Normandy, beginning the campaign that would end with the unconditional surrender of Germany in May 1945. 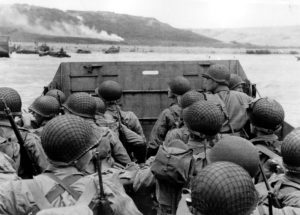 Roosevelt had addressed America via radio the day before, on the evening of 5 June, about the liberation of the city of Rome by Allied troops: “The first of the Axis capitals is now in our hands. One up and two to go!” 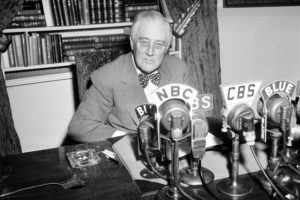 In his national radio address of 6 June, both the situation and the tone were strikingly different. President Roosevelt did not provide a factual report on events, but asked his countrymen to join him in a nearly 600-word prayer he had written himself.

Last night, when I spoke with you about the fall of Rome, I knew at that moment that troops of the United States and our Allies were crossing the Channel in another and greater operation. It has come to pass with success thus far. 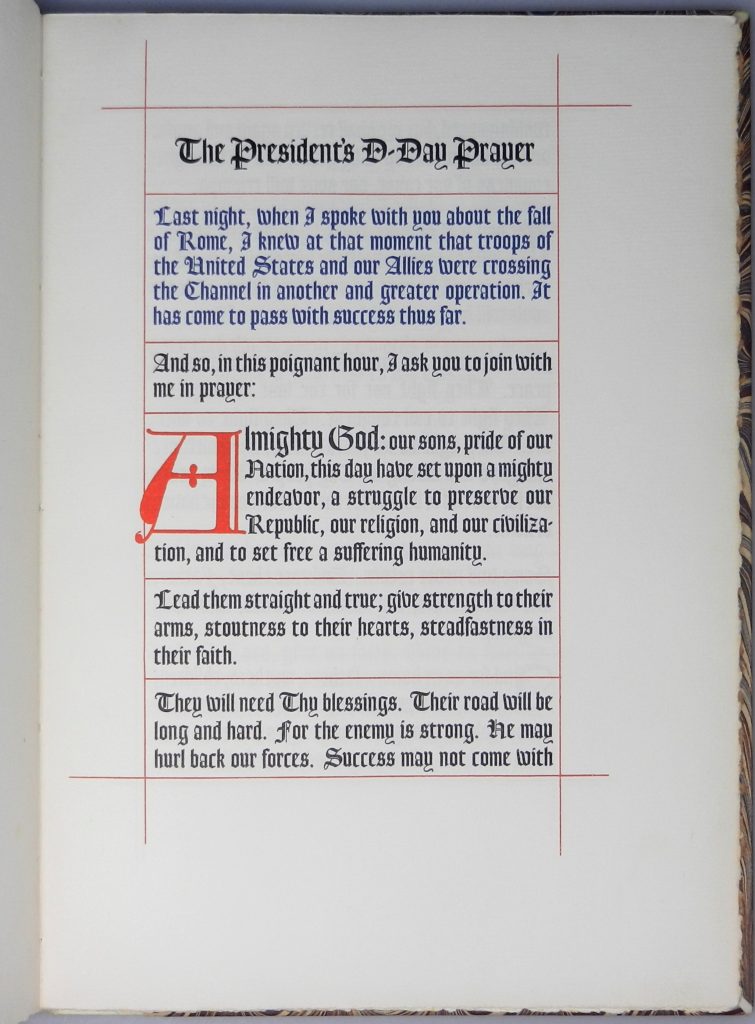 And so, in this poignant hour, I ask you to join with me in prayer.

Almighty God: Our sons, pride of our nation, this day have set upon a mighty endeavor, a struggle to preserve our Republic, our religion, and our civilization, and to set free a suffering humanity.”

Roosevelt’s candid recognition suited the perilousness of the undertaking and the uncertainty of the outcome.

“They will need Thy blessings. Their road will be long and hard. For the enemy is strong. He may hurl back our forces. Success may not come with rushing speed, but we shall return again and again; and we know that by Thy grace, and by the righteousness of our cause, our sons will triumph.

They will be sore tried, by night and by day, without rest – until the victory is won. The darkness will be rent by noise and flame. Men’s souls will be shaken with the violences of war.”

Even in the midst of the most extreme violence, Roosevelt sought to morally delineate the cause of his nation and its Allies from that of its foes. In so framing history’s largest amphibious invasion, Roosevelt drew a clear line between invaders and liberators, and set definitive limits to the scope and duration of military ambition.

Some will never return. Embrace these, Father, and receive them, Thy heroic servants, into Thy kingdom.

And for us at home – fathers, mothers, children, wives, sisters, and brothers of brave men overseas, whose thoughts and prayers are ever with them – help us, Almighty God, to rededicate ourselves in renewed faith in Thee in this hour of great sacrifice.

Many people have urged that I call the nation into a single day of special prayer. But because the road is long and the desire is great, I ask that our people devote themselves in a continuance of prayer. As we rise to each new day, and again when each day is spent, let words of prayer be on our lips, invoking Thy help to our efforts.

Roosevelt asked his countrymen for patience and resolve, attempting to prepare them for the inevitable hardship and loss that would attend wresting control of continental Europe from Nazi Germany.

Give us strength, too – strength in our daily tasks, to redouble the contributions we make in the physical and the material support of our armed forces.

And let our hearts be stout, to wait out the long travail, to bear sorrows that may come, to impart our courage unto our sons wheresoever they may be.

“Let not the keenness of our spirit ever be dulled. Let not the impacts of temporary events, of temporal matters of but fleeting moment – let not these deter us in our unconquerable purpose.

With Thy blessing, we shall prevail over the unholy forces of our enemy. Help us to conquer the apostles of greed and racial arrogances. Lead us to the saving of our country, and with our sister nations into a world unity that will spell a sure peace – a peace invulnerable to the schemings of unworthy men. And a peace that will let all men live in freedom, reaping the just rewards of their honest toil.

Thy will be done, Almighty God.

On 7 November 1944, Roosevelt was re-elected President for an unprecedented fourth term. In December, this limited issue of his D-Day prayer was printed “for his friends at Christmastide”. 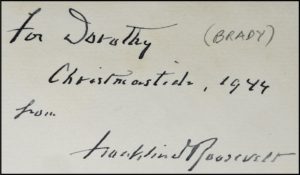 This copy of Roosevelt’s D-Day Prayer was inscribed by FDR for Dorothy Jones Brady, his White House secretary and stenographer.

Brady began her federal career at the Department of Agriculture secretarial pool. Reassigned to the White House, she became secretary to presidential press secretary Steve Early. After substituting several times for the FDR’s secretary, Grace Tully, Brady accompanied FDR on campaign trips and on visits to his home at Hyde Park. She was with FDR when he died on 12 April 1945, less than a year after D-Day and less than a month before Germany’s 7 May 1945 unconditional surrender. 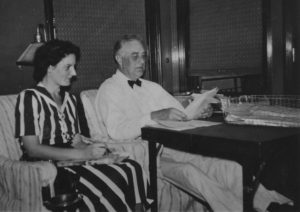 On 18 January 1945, less than a month after Roosevelt inscribed this copy of his D-Day prayer for Brady and less than three months before he died, Roosevelt was in his west wing office working on a speech with Dorothy Brady, Grace Tully, Samuel Rosenman, and Robert Sherwood. Roosevelt “suddenly stopped, look around, and asked “What in this room reminds you the most of me?” Dorothy Brady named “a portrait of John Paul Jones” who was of course the first well-known American naval commander during the Revolutionary War. The choice was fitting; at the height of his youthful promise, before being crippled by polio, Franklin Roosevelt had served for seven years as Assistant Secretary of the Navy, including during the First World War. “When Mrs. Brady returned from the final trip to Warm Springs she found the Jones portrait waiting for her.” (Ferrell, The Dying President)

Brady went on to serve as secretary to cabinet secretaries and assistant to the president of the Pullman railroad car company. She died at age 87 in 1999.

In 1935, the president began a Christmas tradition of having addresses or messages by him printed at his own expense by the Government Printing Office. “Most of them are slim quarto volumes bound in boards with gilt lettered backstrips of leather or quarter bound in parchment with a gold-stamped morocco label affixed to the spine. Every copy issued by FDR was numbered and signed by him and as a rule, he also inscribed each book with an appropriate Christmas greeting to the recipient…. The FDR Christmas Books are prime collector’s items, of course, but they fall more within the category of personal and intimate FDR relics or mementos…” (Halter, p.193-4) 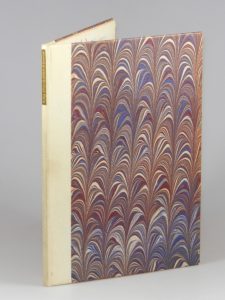 The 100 copies of Roosevelt’s D-Day Prayer printed in 1944 were the last of FDR’s Christmas books, and arguably the most poignant.

The original fine binding features a quarter vellum spine over marbled paper-covered boards. A gilt-stamped morocco spine label reads: “D-Day Prayer by Franklin D. Roosevelt”. The contents are printed black, blue, and red on laid paper with untrimmed fore and bottom edges and gilt top edge. The prayer is separated into short stanzas, each framed with a red ruled box.

Condition is near fine. The binding is square and tight with sharp corners and almost no wear. We note mild soiling to the spine, notably at the slipcase cutout. The contents show mild age-toning to the page edges and light spotting, primarily to the endpapers. The blank leaf following the text and preceding the limitation page shows some wrinkling and a vertical crease. The name “(Brady)” is written in pencil beside President Roosevelt’s inscription. 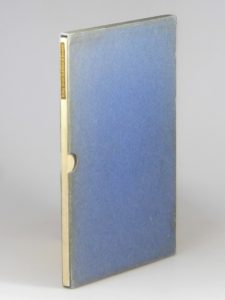 The volume is housed in the original blue paper-covered card slipcase. The slipcase is fully intact with modest toning and wear to extremities.

This piece of history is offered for sale HERE.

One thought on “FDR’s D-Day Prayer”