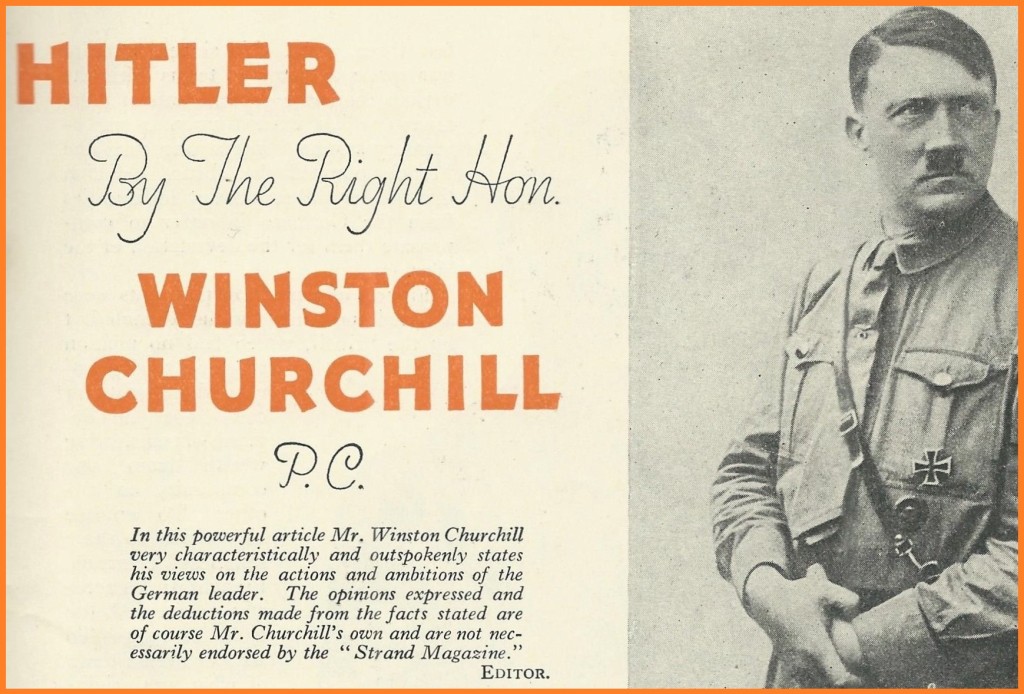 A powerful argument can be made that Adolf Hitler is the reason why Winston Churchill is so iconic.

During his long public life, Winston Churchill played many roles worthy of note – Member of Parliament for more than half a century, soldier and war correspondent, author of scores of books, ardent social reformer, implacable wartime foe, conciliatory advocate of peace and transnational unity, combative cold warrior, painter, Nobel Prize winner. So even without the Second World War, one could argue that Churchill’s extraordinary life and endeavors would remain remarkable.

Remarkable perhaps, but certainly less remarked upon. Churchill without the Second World War would be far less well-known. Churchill’s preeminence as a historical figure owes most to his indispensable leadership during the Second World War. And Hitler bears more responsibility for that war than any other single figure.

Hence, what the one man had to say about the other is fascinating. Neither man was known for a strong inclination to self-censorship.

Particularly fascinating is what Churchill had to say about Hitler in an article titled “The Truth About Hitler” published in The Strand Magazine in November 1935. 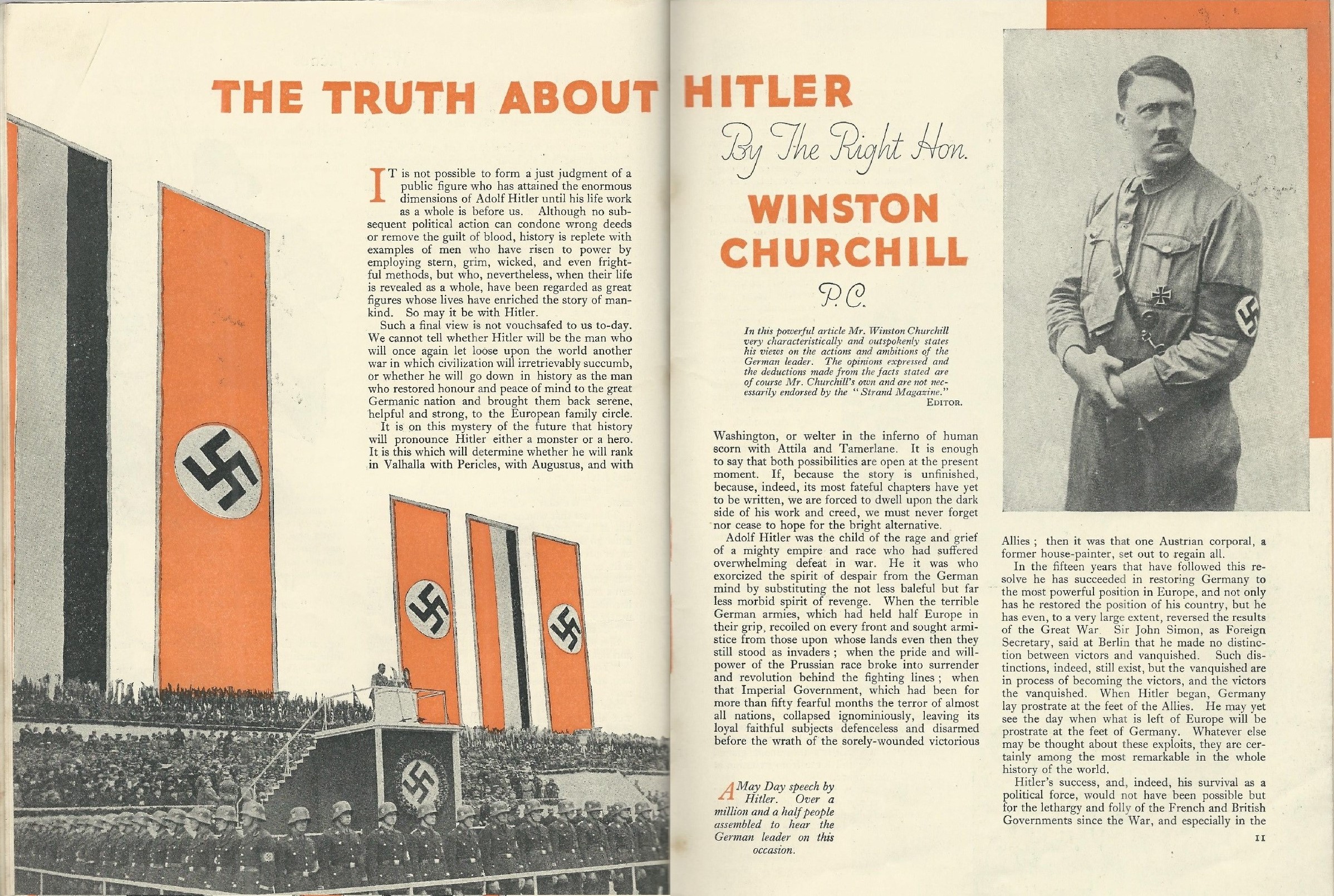 This article is fascinating not just for what it said, but for how it was considerably expurgated and tamed when published less than two years later in October 1937 in Churchill’s well-known book, Great Contemporaries. There, in the form it has become known to most readers, it was retitled as “Hitler and His Choice”. 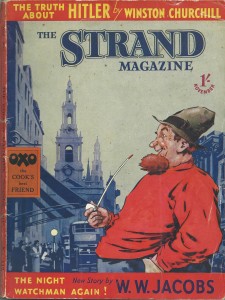 The unexpurgated “The Truth About Hitler” in The Strand Magazine was the headline, featured article. The title and author appeared prominently in bold yellow letters within a red banner across the upper front cover. Within, the article spanned pages 10 -21 and included 24 photograph illustrations.

The opening paragraphs of this fuller, 1935 version contain an entire paragraph about the question of whether “history will pronounce Hitler either a monster or a hero. It is this which will determine whether he will rank in Valhalla with Pericles, with Augustus, and with Washington, or welter in the inferno of human scorn with Attila and Temerlane. It is enough to say that both possibilities are open at the moment.” This paragraph, excised from the 1937 version, concludes: “If, because the story is unfinished, because, indeed, its most fateful chapters have yet to be written, we are forced to dwell upon the dark side of his work and creed, we must never forget nor cease to hope for the bright alternative.” 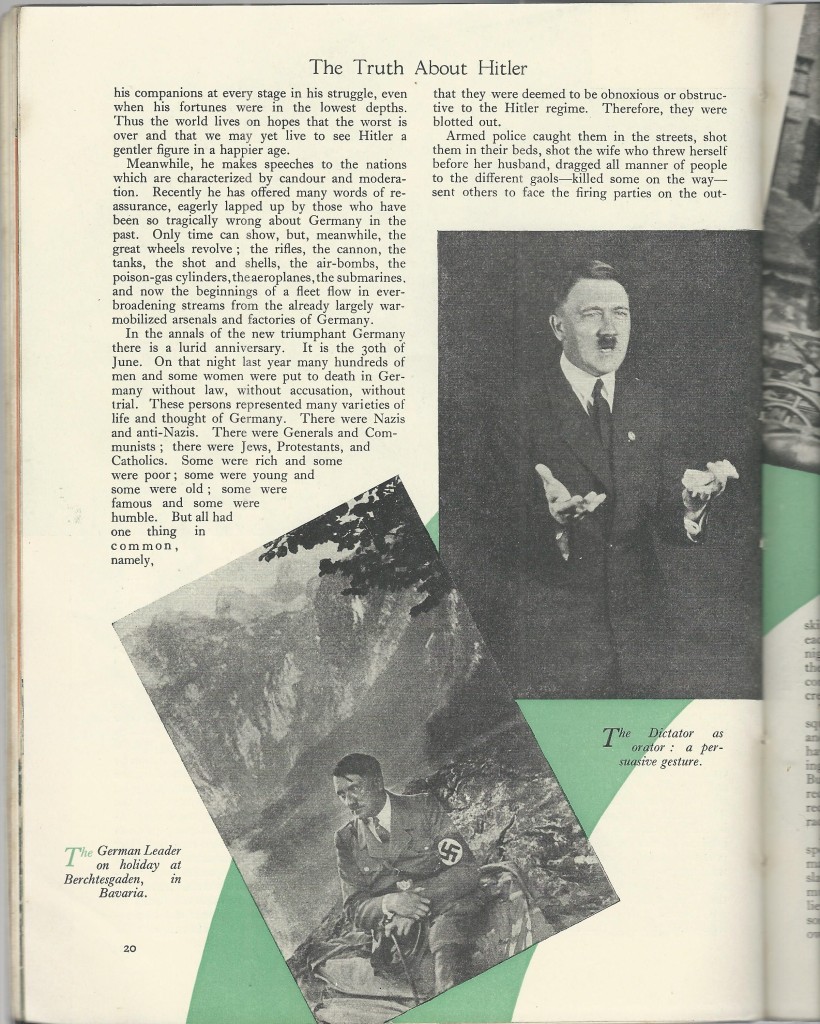 Other small details are altered or excised, but by far the primary difference between the 1935 and 1937 versions is removal of the final six paragraphs of the former from the latter. Churchill spends four of these six paragraphs describing and excoriating the horror of Hitler’s bloody “Night of the Long Knives” purge (30 June 1934) in emotionally evocative detail, concluding: “Adolf Hitler took upon himself the full responsibility…. I call the slaughter of a human being in peace without trial murder…”

Churchill’s closing paragraphs about Hitler clearly echo the defiant, combative, and unyielding Nazi foe Churchill would become as wartime Prime Minister less than five years after this article was published. But in 1935, Churchill was still a political outcast, out of power and out of favor. So it is all the more remarkable that The Strand Magazine would have not just printed, but overtly solicited this piece from Churchill. On 15 May 1935 Strand editor Reeves Shaw wrote to Churchill asking specifically for “an article entitled ‘The Truth About Hitler’” and specifically requested “…be as outspoken as you possibly can in your appraisement of Hitler’s personality and ambitions, and absolutely frank in your judgement of his methods.” (Gilbert, Vol. V, C.V. 2, p.1175) 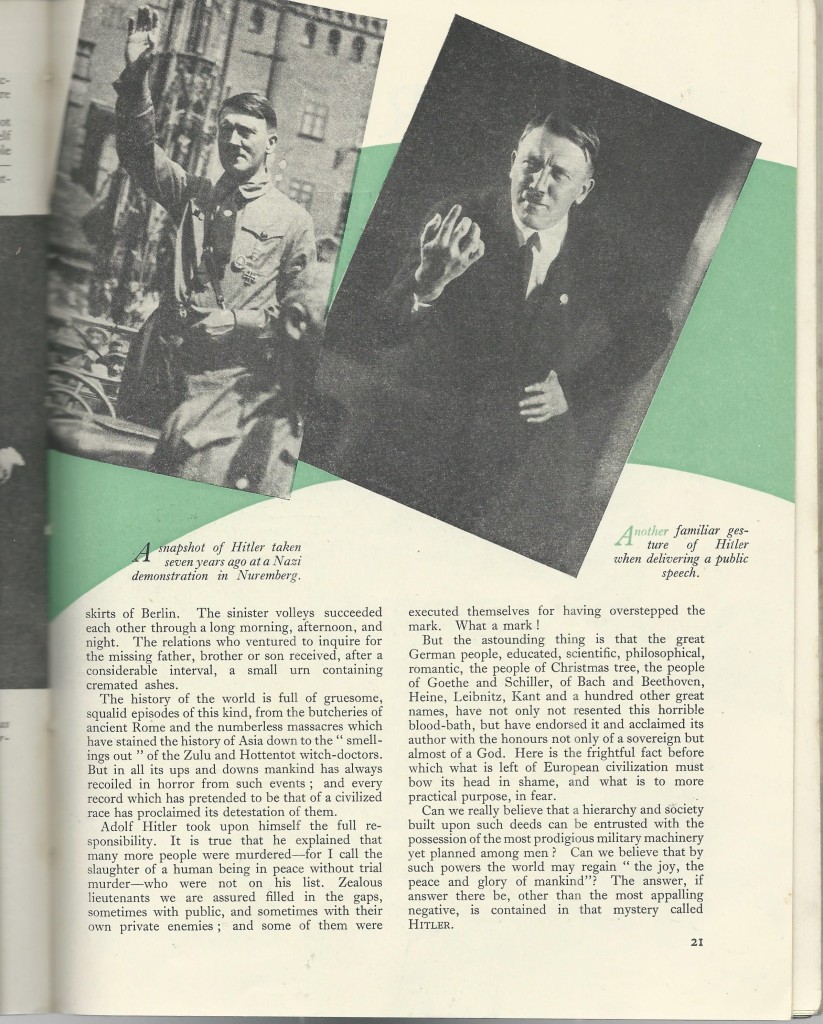 Perhaps most surprising is Churchill’s harsh criticism of the German people for their complicity in Hitler’s reign. Throughout the Second World War, Churchill’s speeches are noteworthy for distinguishing the inherent virtues of peoples from the deficiencies and vulgarities of their leaders. But in the final two paragraphs of “The Truth About Hitler” Churchill extends his indictment of Hitler to the German people themselves: “But the astounding thing is that the great German People, educated, scientific, philosophical, romantic… have not only not resented this horrible blood-bath, but have endorsed it and acclaimed its author with the honours not only of a sovereign but almost of a God. Here is the frightful fact before which what is left of European civilization must bow its head in shame, and what is more to practical purpose, in fear.” Churchill’s final paragraph asks: “Can we really believe that a hierarchy and society built upon such deeds can be entrusted with the possession of the most prodigious military machinery yet planned among men?”

“The Truth About Hitler” is perhaps a window into the deep outrage and genuinely fearful concern of a quintessential man of action both caged and provoked, rattling the bars of his cell to call attention. The Churchill of 1935 had full, even prescient knowledge of the imminent danger to his country, but remained confined to the political exile of his “wilderness years” with his voice substantially relegated to the parish pulpit of periodicals rather than the bully pulpit of national leadership. The comparatively tamed and truncated version of Churchill’s profile of Hitler published in Great Contemporaries in 1937 is a marked contrast. Ironically, Churchill’s 1937 version can be seen as a more conciliatory and restrained appraisal of Hitler, perhaps reflecting Churchill’s earnest desire to avoid the war that he would fight with such ferocious resolve only a few years later.

We will provide scans of all pages of “The Truth About Hitler” in the November 1935 issue of The Strand Magazine upon request.

13 thoughts on “The Truth About Hitler – Churchill’s original, unexpurgated profile of Hitler in November 1935”